Daria Kaleniuk: Poroshenko needs to give up control of law enforcement, judiciary

This morning, July 9, I had the chance to meet with U.S. Secretary of State Rex Tillerson, who arrived with a very brief visit for the first time in Kyiv and decided to meet first with young reformers from the government.

Others present from Ukraine’s side were Naftogaz CEO Andriy Kobolyev, member of parliament Mustafa Nayyem, Horizon Capital CEO Lenna Koszarny and myself, executive director of the Anti-Corruption Action Center. 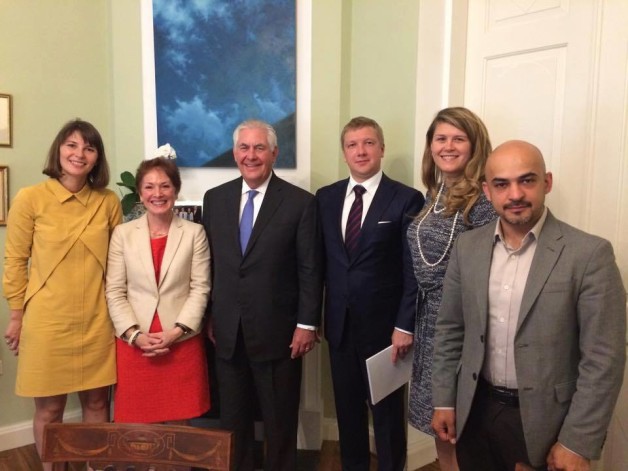 After discussion with us, he left for a meeting with President Petro Poroshenko.

Tillerson explained that he wants to understand how Ukraine is performing in reforms, as successful reforms are important for Ukraine to succeed. He also was keen to know what are key demands and requests to government from average Ukrainian citizens.

I have explained to the secretary the nature of vicious corrupt circle in Ukraine. People abuse state office to rob the country, then they use dirty cash to invest into the elections and obtain control over more state resources.

The vicious circle blocks and slows down all the reforms.

It is enabled by totally controlled by politicians. law enforcement agencies and judiciary, which for decades have been covering up grand corruption. I recommended to Tillerson to advise Poroshenko to give up his political control over law enforcement and judiciary and let them be independent.

I have illustrated the success of the National Anti-Corruption Bureau of Ukraine, particularly with the example of recent successful undercover operation conducted jointly with FBI regarding member of parliament Boryslav Rozenblat, who was covering up illegal amber extraction. And, of course, I have stated the importance of the leverage of the U.S. and other foreign partners of Ukraine in the establishment of NABU and its proper functioning.

I asked Secretary Tillerson for U.S. support in the quick establishment of the anti-corruption court in Ukraine with a special mechanism of selection of anti-corruption judges. Moreover, I have emphasized the need to protect NABU from constant attacks and attempts to undermine it.

Therefore, it has to be linked to very specific anti-corruption deliverables.

Other discussion centered on reforms already achieved, but the need to make them irreversible, since ongoing corruption and interference by political leaders remain a threat to undermining the progress achieved thus far.