Counterintelligence in White Coats: Secret Service of Ukraine Against Patients

After the nuts and liquefied gas, economic counterintelligence of SSU saw a “threat to national security” in the procurement of medicines by international organizations.

Counterintelligence turned into pharmacists and began to explain to the Ministry of Healthcare and international organizations UNICEF and UNDP, which medicines should be bought on public expense, and which – not. For this reason, SSU started to call cancer patients and doctors in for interrogation. 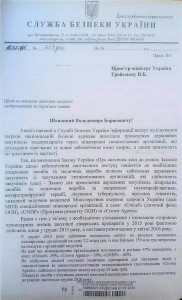 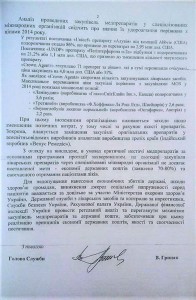 Part of the «chain letters» became available to Anti-Corruption Action Centre and were also published by the opponents of drugs procurement reform. Their content clearly shows how SSU staff discredit international organizations, trying to influence on the distribution of budget funds and throw out certain drugs from the nomenclature of the Ministry of Healthcare.

The Head of the Security Service of Ukraine Vasyl Hrytsak started to advise the Prime Minister Volodymyr Groysman to find a mechanism that can return the procurement of drugs back to the government institutions.

However, neither numerous anticorruption investigations, nor criminal cases started by the Security Service regarding the procurement of drugs by the team of former Head of the Ministry of Healthcare Raisa Bohatyriova did not put the Head of SSU on the thought of “review of the mechanism” using which representatives of Party of Regions were carrying out dubious medical tenders.

On the contrary, the criminal proceeding against pharmaceutical distributor who sold drugs at exorbitant prices to the Ministry of Healthcare when it was managed by Bohatyriova was transferred by the Security Service to the Police, where it was successfully closed. It was about UAH 1.26 billion loss caused to the State budget and overpricing of drugs by 20-40%.

According to “Nashi Hroshi” not a single Ministry of Healthcare‘s official was punished for corruption and bribery after the Revolution of Dignity.

Because of kickbacks and inflated prices for which Ministry of Heathcare was buying drugs over the years and because of inactivity of law enforcement authorities, which did not see the monopoly of pharmaceutical distributors and covered obvious “schemes”, Government adopted a historic decision in 2015: to take drug procurement from the Ministry of Healthcare and pass them to international organizations.

However, once the international organizations bought 67,5% of the drugs directly from manufacturers and pushed out Ukrainian distributors which, previously won 96% of tenders Ministry of Healthcare, this reform has become inconvenient and unnecessary.

As an argument in favor of “reviewing of the mechanism of drug procurement,” the Head of the SSU adduces the delays in deliveries by international organizations and inflated prices. Is this true?

The document states that till July 2016 the British company Crown Agents has not made any supply of medicines for children’s oncology. Although according to the Ministry of Healthcare, the company delivered 33.91% of medicines till July 2016. For other programs this figure was much higher. For example, all medicines were delivered to children with hemophilia, 74% of medicines – for tuberculosis diagnostics. This data is published on the website of the Ministry. Also, SSU notes that 71 medicines were purchased by Crown Agents at higher prices than expected.

However, representatives of the SSU compared the cost of medicines in UAH, not price in USD, although 94% of oncology medicines being bought by Ukraine are foreign and they traditionally bought for currency.

When comparing prices of 2014-2015 in USD, not in UAH, it turns out that 84% of medicines were purchased at lower prices than the Ministry of Healthcare bought in 2014. The savings is about 35%, but the SSU does not see it.

The same thing is with drugs that referred as “individual monopolistic position” by the SSU.

The drug “Lamivudine” produced by “ GlaxoSmithKline ” (Canada) has risen in price for 5.6 times “, – stated in the letter of Hrytsak.

Anti-corruption Action Centre jointly with patient organizations recalculated the price of each medicine, bought by international organizations in 2015. The overall saving is 620 million UAH. During the procurement of medicines from tuberculosis 15 out of 19 positions were purchased at lower prices than the prices of MoH, all medicines on pediatric hemophilia were also purchased cheaper. 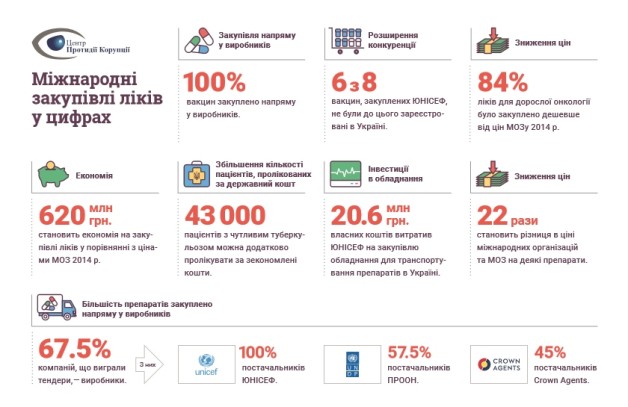 International organizations managed to purchase some of the drugs at 22 times lower price than the MoH.

SSU against the medicines

Apart from that, Counterintelligence division of SSU for the Protection of State Interests in Economy managed by Serhiy Semochko wrote to the MoH that they consider expanding the list of medicines purchased by international organizations as “threatening”. 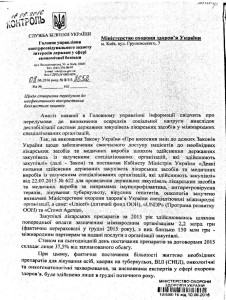 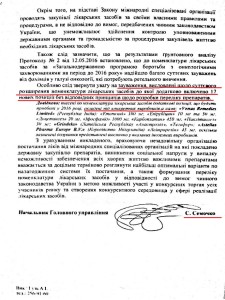 Counterintelligence tried to put pressure not only on the management of MoH but also on nomenclature groups where doctors and patients are forming the list of medicines for procurement. Thus, the SSU alluded to one of groups of experts of Ministry of Healthcare that the new medicines introduced by them to the list is seemingly represented by single manufacturer.

But this does not reflect the reality. According to the register of wholesale selling prices, which is available publicly, the opposite is true: the medicine, mentioned by the SSU was represented by multiple and sometimes – by ten manufacturers.

Apparently, officials were trying to adjust nomenclature in a positive line for distributors and at the same time to influence on the distribution of finances between all positions. But they did not limit themselves with written notices.

Anti-corruption Action Centre became aware of how representatives of the SSU during the meeting of the working group of the MoH distributed a subpoenas for interrogation to the members of nomenclature commissions and did not let them out of the room until they have signed that they recieved those subpoenas.

After that during interrogations in the SSU an “explanatory” work with members of nomenclature groups was performed so that they refused from the expansion of the list of drugs that the state purchases.

The same counterintelligence division intervened in procurement of the materials for dialysis worth a quarter billion UAH per year. This fact is confirmed by the documents published by the edition “Nashi Hroshi”. They show that SSU plays a significant role in a competitive war of two producers for increasing the share of public procurements.

Apart from the state procurements, European and Indian pharmaceutical companies came to the attention of the intelligence as their drugs are “threatening the state security”. For example, cough lozenges. Yes, counterintelligence banned the popular drug Strepsils.

“In the course of criminal investigation employees of the Economic Security of the SSU carried out actions aimed at complete blocking of complainant’s business in Ukraine, namely – seizure of financial documents from banks that provide services to the compliant, seizure of the registration materials for medicinal product “Strepsils” from the state regulatory authority, appeal to the Ministry of Economic development and Trade with a motion to impose sanctions in the form of suspension of foreign economic operations of the compliant etc.” – as described in the statement to the police of the German manufacturer.

Here is an example of another letter to a different pharmaceutical company with the requirement to provide all documents, up to the instruction which could be found on every website with the description of the drug.

It turns out that instead of the real fight against tender “schemers” and searching for perpetrators of corruption among ex-officials of MoH the protection of economic interest of the State in medical field has been reduced to the wars for the division of the market.

The closer the procurements for the next year, the louder the critics of international organizations and a new team of MoH.