The reason is ignoring her direct responsibilities.
Kyiv Medical University headed by Amosova had the dubious honour of being the only one in the country whose 3rd year stomatology students did not take the KROK testing.

An exam they cannot go on to the 4th year without. They did not take the test because the University did not make an agreement to do it with the Testing Centre that conducts exams in all medical schools in Ukraine.

For quite a while Suprun has been criticized for inaction and covering up of Amosova. After the University President was suspended, however, a real war was waged against the Minister of Healthcare.

Medical University went on strike. However, students were not the ones to start it, university administration was.

Cabinet of Ministers members got phone messages threatening permanent strike unless Suprun is fired from her post.

Members of Parliament took Amosova’s side, whereas former Party of Regions members, adorned in the new party “For life” emblems, threatened to block the work of the Ministry of Healthcare unless Amosova is renewed on the position of the University President.

Apparently, it’s not just ex members of the Party of Regions that have mercenary agents army at their disposal, but famous doctors and heads of medical schools do as well.

Why is it that such an uproar was raised because the university President was not even fired, but suspended for not fulfilling her direct responsibilities to properly organize the studying process?

It can be found not just in politics, but in medicine as well. It links the likes of doctors who choose their path summoned by their wallets and not their hearts, university presidents and their families, odious MPs and even judges.

Kateryna Amosova has been working at the National Medical University her whole life.

Her declaration reveals that her family is quite affluent, unlike the university headed by Amosova.

Three BMWs, two flats, a 500 sq.m. house, plots of land near Kyiv and nearly 3.5 million of annual income from the Big Pharma for clinical trials. 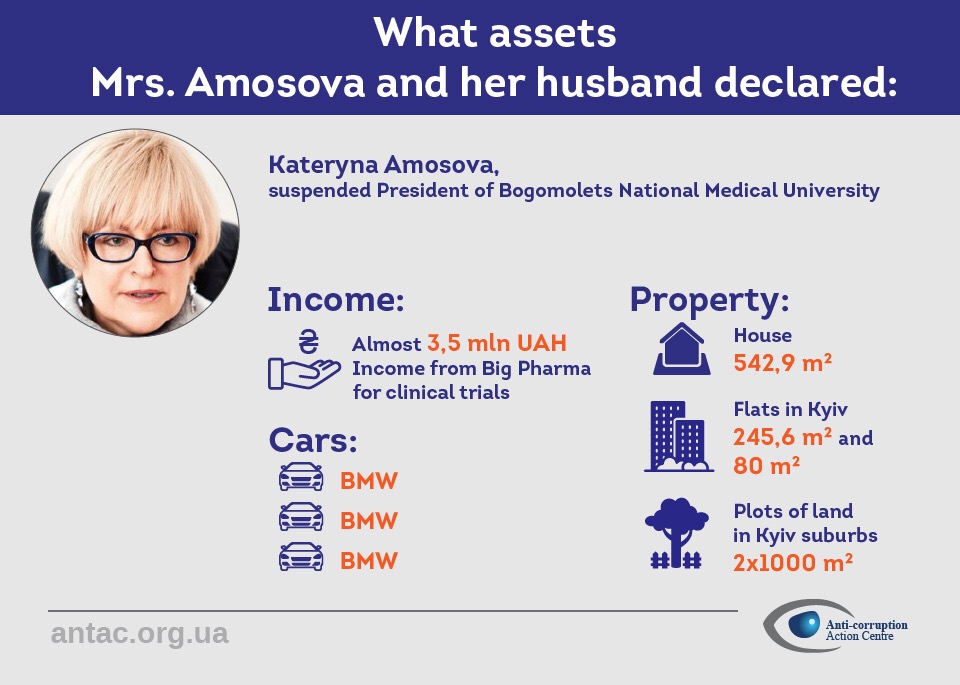 Lion’s share of the University President’s and her husband’s income – the latter, by the way heads Chair of Surgery at the University headed by his wife – constitutes income from pharmaceutical companies.

Clinical trials, conducted at medical institutions or universities, are worth millions, thus becoming a good source of income for under-financed medical budgets.

Administration of medical or educational institutions where the trials are conducted are just mediators arranging them, while the trials themselves are conducted during working hours involving university facilities, hospital employees and patients.

As we can see in Amosova’s declaration, however, the spouses profit well from the arrangement, which cannot be said for the university where both of them work, as the latter simply couldn’t afford to pay for the students’ exam.

Mere pennies go to hospitals where the trials are conducted, such as Main Military Clinical Hospital or Alexander Hospital in Kyiv.

It was because of these wind-fall profits that criminal proceeding for the abuse of office was opened against Amosova and her husband Mishalov as far back as 2015.

As many as 10 (!) pharmaceutical companies feature in this case, they paid the spouses money which “was several times bigger than that paid to the university” in 2014-2017, according to the court decision.

The investigation has been going on for 2 years.

By no means did the income from clinical trials prevent Kateryna Amosova from paying herself bonuses as well as getting paid several salaries at once by holding several positions on part-time basis at her university.

In 2014-2015, Amosova decided on a number of increments for herself without the Ministry of Healthcare’s approval, she also held the position of University President along with Head of chair at the University, which is contrary to the Law.

This episode from National Medical University President’s activities is also mentioned in the criminal case.

Much more significant losses were incurred by the Medical University from overcharge for repair of buildings.

In 2016, criminal proceeding was opened in connection with 12.6 million UAH overprice for construction works.

At the time, “Construction and Design Firm of Ukraine” headed by Kostiantyn Volodymyrovych LIASHUK, was chosen to be the main contractor for buildings repair.

President Amosova’s daughter is also a medical professional. She decided against building her career at a distance and after graduation went on to work as a senior lab assistant under her mommy’s wing at the daddy’s chair.

During her education she was listed in the Honours Book of Bogomolets National Medical University as “the best student” of the Medical University. The reason we’re mentioning it – no reason, actually. It is just so telling…

A CLAN FOR A CLAN

A few days ago, Kateryna Amosova managed to get re-established at her position of the University President through court decision.

It was a typical representative of the judge clan that re-established Amosova at her position – Iryna Petrivna Vasylchenko.

Her husband, Oleh Shchotkin, is also a judge from Economic Court of Kyiv region. He was the one to pass dubious decisions to basically give away gas deposit to run-away MP Oleksandr Onyshchenko.

Iryna Vasylchenko’s mother is also a former judge, in 2006-2016 worked at Kyiv District Administrative Court. She declared a 12-“Olimpiiskyi”-stadiums-large area of land – over 8 hectares.

Money, so sorely lacking for the exam at the medical university, is readily available for the purpose of whitewashing the administration’s reputation.

In February, the university announced a tender for “mass media coverage of University’s activity”, worth over 3 million UAH.

The money was allocated for production and placement of articles and news items on TV, radio, press and on-line sources without “advertisement” disclaimer.

Therefore, the state educational institution headed by Amosova is willing to spend 3.11 million UAH of the budget funds for the puff pieces about their stellar performance.

According to the journalists and “ProZorro” system, only Dnipro Mayor’s Office is paying more for their public image.

As many as three medical clans rose against Suprun and her Ministry’s team.

It was “the old Olia” who lost it first, MP from Blok Petra Poroshenka and head of the respective committee at the Verkhovna Rada, Olha Bohomolets, that bitterly criticized Suprun’s medical reform and did her best to oppose voting for it at the Rada.

The critics were soon joined by the well-known heart surgeon Borys Todurov, head of the state Heart Institute. It was in children’s ward of his institute that the activists recently found Yurii Krysin, head of mercenary agents who was accused of murdering the journalist.

Now Kateryna Amosova as well as her whole family, is working at the National Medical University.

Sadly, our healthcare system turned into a fortunes care system, a medieval feudal system where titles are inherited and war is waged against those threatening the current power distribution and reigns over one’s kingdom.

That is what the most prominent state hospitals have come to – small feudal kingdoms with their own system of exactions, hierarchically growing closer to the top, their system of healthcare administered by mercenary agents, coalitions with other powerful feudals such as politicians and law enforcement.

Regular doctors in the system are reduced to serfs deprived of rights who have to pay first for the right to enter the medical school, graduate from it, get a job and then keep paying the tribute to the head doctor (feudal) for the place in the system.

Olexandra Ustinova, member of the Board of the Anti-corruption Action Centre, for the “Ukrayinska Pravda.Life”

P.S.: On March 6 the Ministry of Healthcare suspended Kateryna Amosova from the position of the University President, while the Ministry commission is reviewing the documents.