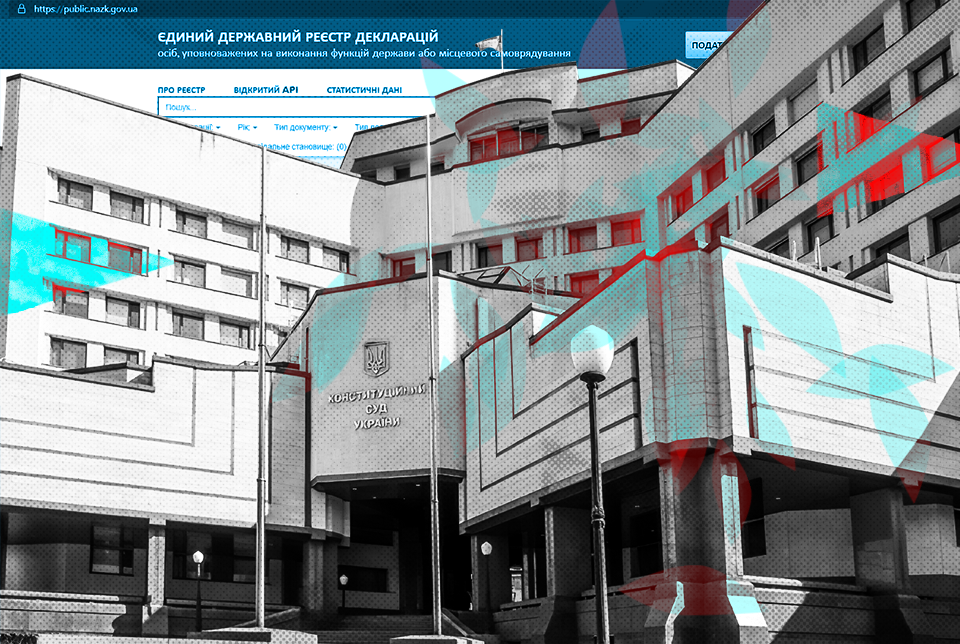 This decision of the Constitutional Court means the abolition of the system of asset declaration disclosure of public officials and destroying a significant part of the anti-corruption achievements of the Revolution of Dignity.

“Judges of the Constitutional Court have allowed public officials to legalize bribes received over the years since the Revolution of Dignity and to conceal illegally acquired property. Officials can now buy villas, castles or other expensive assets that do not correspond their official income or legalize previously acquired ones and not worry about punishment because judges of the CCU have given them an indulgence,” Vitaliy Shabunin, head of board of AntAC, comments.

What did the Constitutional Court abolish?

This means only NAPC staff can access the declarations but not the general public.

2) all provisions on control and full verification of declarations, monitoring of the way of life, notices on the significant changes of assets.

This means nobody can perform verification of asset declarations.

3) provisions on responsibility for corruption offences.

This calls into question the procedures of administrative liability or prosecution of officials for any violations of anti-corruption legislation.

This abolishes all the powers of the NAPC to control and verify declarations and eliminates all inspections and decisions on their results that have taken place since the launch of the system.

5) provisions on providing instructions, preparing protocols on administrative offences and substantiation on conclusions on corruption and corruption-related offences.

This means that the NAPC cannot initiate even disciplinary proceedings in regards to public officials violating anti-corruption legislation.

6) provision to provide the NAPC with requested information.

This is a logical continuation of the abolition of the NAPC’s controlling powers. The agency will not be able to check anything and request additional information.

Based on the decision, it will no longer be possible to criminalize false statements in public officials’ declarations, as this is allegedly a disproportionate punishment for the action.

That means that even if the Verkhovna Rada adopts a law on the re-introduction of criminal punishment for false statements in declarations, the CCU will definitely re-declare it unconstitutional based on this decision.

Declarations are now becoming hidden because the rules on 24/7 free access of the general public have been declared unconstitutional. Any control and verification of declarations are also no longer possible.

Similarly, given the motivational part of the decision, it will no longer be possible to delegate any supervisory powers over judges to bodies outside the judiciary. This will only strengthen the collective cover-up and corporatism among judges.

CCU granted unconstitutional many provisions that were not even a subject of the review in the initial appeal.

The NAPC, which was established primarily to verify the declarations of officials and control conflicts of interest in their activities, has lost most of its powers. This effectively stops any further operation of this body. Moreover, the NAPC will not be able to effectively exercise other functions, such as control of party finances.

The motivational part of the decision does not provide for the justification of the unconstitutionality of most of the abolished provisions. This makes it much more difficult to understand what is the constitutional issue with these provisions. In turn, this calls into question the possibility of re-introducing of such provisions. For example, it is unclear why declarations can no longer be made public. And in the absence of justification for this, it is impossible to prepare such legislative changes that would take into account the legal position of the CCU.

The abolition of these norms violates Ukraine’s obligations under the IMF program and loan agreements with the EU, as well as the requirements for granting visa-free regime to Ukraine with the EU countries.

We would like to recall that during last year the Chairman of CCU Oleksandr Tupytskyi earned almost 4,5 million UAH of our taxes. A few hours ago, this could be seen in the public register of electronic declarations, access to which the CCU closed with this decision.