Paul Torsten is the head of the Austrian company GEOLOG Oil & Gas Trading GmbH.  This company is controlled by Azarov junior and is associated with the fugitive oligarch Serhiy Kurchenko. This is reported by the project of the Anti-Corruption Action Center Pep.org.ua.

So, the company EMPORION Kaufhausvermietungs-GmbH is also registered at the registration address of the company GEOLOG Oil. As of May 2018 the co-owner of the company was Garda Handels – und Beteiligungs GmbH (80%). According to the information of Ukrainian law enforcement agencies, it is controlled by Oleksiy Azarov. 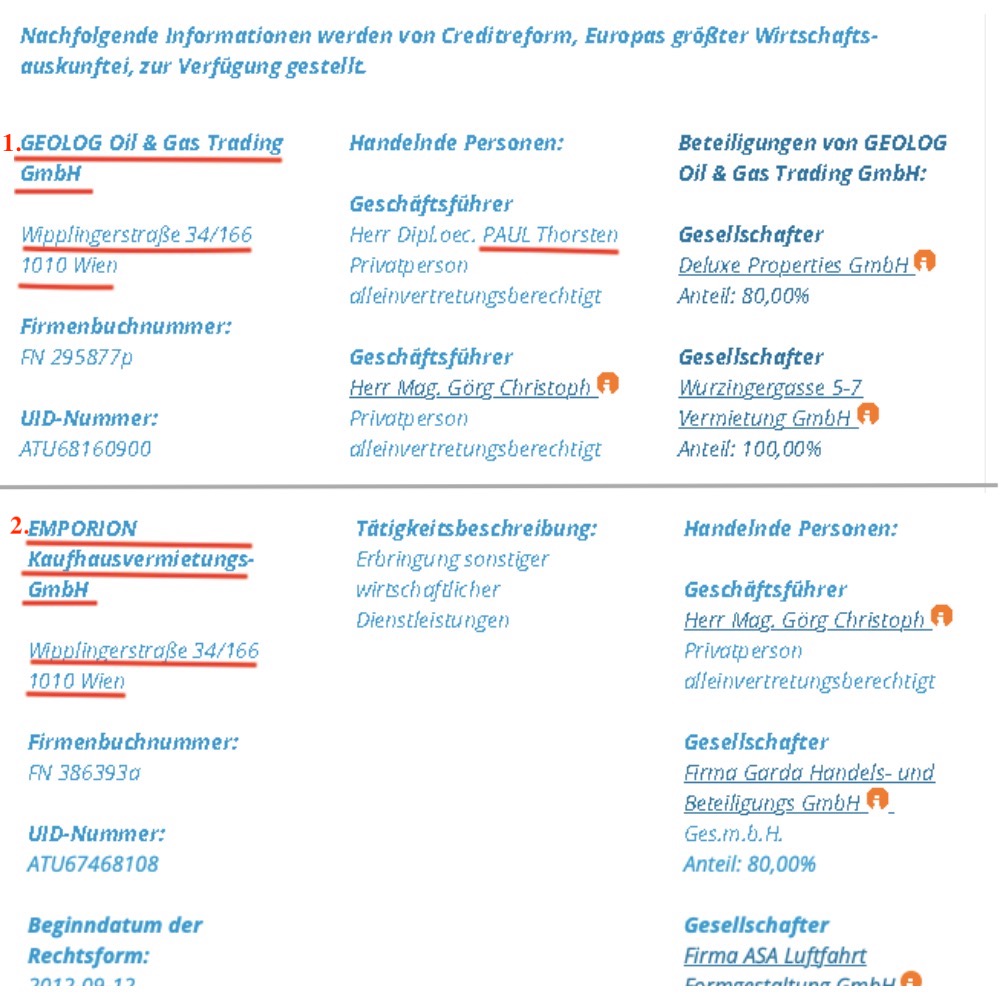 Earlier journalists of the publication Deutsche Welle found the connection between the Austrian and Kurchenko.

In recruitment advertisement published on behalf of Geolog Oil & Gas Trading, the contact phone number in the section contact information is the phone number of Kurchenko’s company Sparschwein Gas.

After the Revolution and the escape of Kurchenko and Azarov from Ukraine, Sparschwein Gas, together with dozens of other companies, became the subject of number of criminal proceedings regarding state losses worth billions of UAH. In Germany law enforcement agencies became also interested in Sparschwein Gas regarding the suspicion of money laundering.

In Ukraine, Paul Torsten is the co-founder of the number of companies, including Altep LLC.  Torsten, so to speak, “inherited” this company from Azarov’s.

Earlier the co-owner of the company was Konstantyn Pyvovarov, the trustee of former head of the Party of Regions and Government of Ukraine Mykola Azarov.

After Maydan Oleksiy Azarov free of charge transferred his rights over the Austrian company Garda Handels – und-Beteiligungs Gmbh to Pyvovarov. The company, according to information of Nashi Groshi, owns the Italian company Agosto 2012 s.r.l.. Two villas in Italian city Olbia (Sardinia) are registered to it.

Besides connection to Kurchenko and Azarov, Paul Torsten is very close to the family of the Member of Parliament of the 7th and 8th convocations Yevgen Muraev.

The Austrian, along with Muraev’s father, is the co-founder of several Ukrainian companies. And exactly these companies of the new member of the Supervisory Board of the state bank Paul Torsten are subjects in several criminal proceedings of Ukrainian law-enforcement agencies.

Kharkiv police suspects officials of Pam House LLC and Altep LLC in appropriation of state funds during the procurement of heating at overestimated prices.

Investigators found that prices of both procurements exceed the average market price of fuel material and heat energy.  According to opinion of law enforcement officers, the production of heat energy was overestimated by 4.18 million UAH.

The investigation also found that during 2016 other communal enterprises in Kharkiv region ordered the supply of fuel materials, steam, hot water and processing of alternative fuels into heat energy at significantly overestimated prices at Altep and Pam House.

According to the decision of the Cabinet of Ministers, Paul Torsten will start to perform duties of the member of the Supervisory Board of the state bank on June 14, 2019.

Pep.org.ua is the project of the Anti-Corruption Action Center. This is the only open Public Register of Domestic Politically Exposed Persons of Ukraine. The Register contains more than 30.000 dossiers of Ukrainian officials, their relatives, business partners and associated companies. The Register started its work in early 2016.