According to Business-Ombudsman Algirdas Šemeta, the number of complaints from businesses concerning the SSU far outnumbers that of other branches of law enforcement. Therefore stripping the SSU of these uncharacteristic functions of economic crimes investigation should be made a political goal for the parliament.

The liquefied gas story is a prime example of what the desire to make a corruption fortune using the SSU as an apprentice may lead to.

The collapse we may currently observe on the autogas market is the direct aftermath of the play in two acts about how the desire to make another fortune at the expense of the impoverished Ukrainians outweighed the obligation to serve one’s people.

This story goes as far back as November of 2016, when lines of tankers with liquefied gas, which became very popular because of its low cost, were stopped at Ukrainian border. Car owners would invest in gas equipment for their vehicles, break even in a few months time and then actually start saving on fuel. Sure enough, the raiders and corrupt officials were all over the significant difference between autogas and petrol prices. If people pay 10 UAH per liter of gas, they can pay 15 UAH as well, with the difference pocketed by the right individuals.

Before the SSU involvement, the gas market was virtually demonopolized with dozens, if not a hundred of players with 3-8% shares. However, because of some obscure agreement, since last autumn Poroshenko decided to give this market to Viktor Medvedchuk. As for the SSU, instead of fighting the imminent threat to national security if the market is monopolized by Medvedchuk, did their best facilitating this monopolization.

It all began with the “K” department of the SSU (so-called department to combat corruption) starting a criminal proceeding against 16 traders on suspicion of funding terrorism. After that, the Energy Customs of State Fiscal Service stopped custom clearance of gas on the SSU demand.

Document 1: The SSU has suspicions that the load contains toxic and potent agents dangerous for the health, and the product specification in the accompanying documents is false (letter of the SSU No. 14/4/1-24861 of 0112/2016). Specialists are to be sent to examine the load. 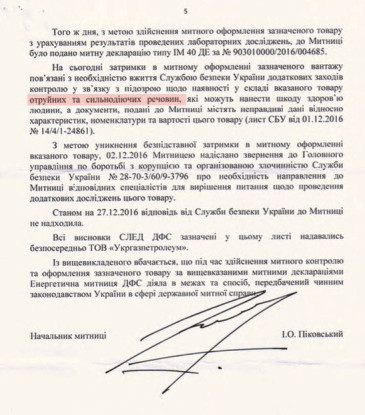 Time was passing, but no evidence of terrorism funding was found. Moreover, it turned out that many detained traders supported the Ukrainian army and volunteer battalions, built housing for them, funded rehabilitation centers etc. Therefore, the traders blockade went on under a different pretense – need to examine the content of the liquefied gas tankers for any “potent and poisonous substances”. Notwithstanding the absurdity of the claim it worked. No one took any samples, though; tankers would be left for months in railway stations retention basins.

The SSU got even more creative after that – they demanded UkrZaliznytsia (Ukrainian state railway company) to check the train wheel pairs for explosives.

Document 2: According to the telegraphic message No. TsTsM-14/70 of 08.02.2017 the schedule of inspection of the wagon wheelsets together with the SSU officer is presented. 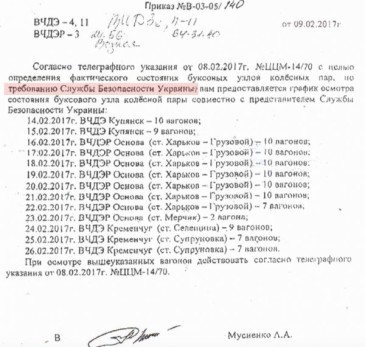 The last stroke of market cleansing was implementing personal sanctions against these traders, courtesy of Stepan Kubiv, Minister of Economy, after the SSU submission. This document was personally signed by the assistant chief of the Security service and chief of the “K” department (combat of corruption) – infamous Pavlo Demchyna, puppet of “the” Hranovskyi, known for being Poroshenko’s “manager” of special services, prosecutor’s office and courts.

Document 3: The letter of the SSU No. 14/2025 of 03.02.2017 to First Vice-Prime-Minister, Minister of the Economic Development and Trade of Ukraine, S. I. Kubiv: The SSU suspects SVG Plus LLC of economic crimes, including concealment of the money transfer direction, possibly for the purpose of financing terrorist organisations. 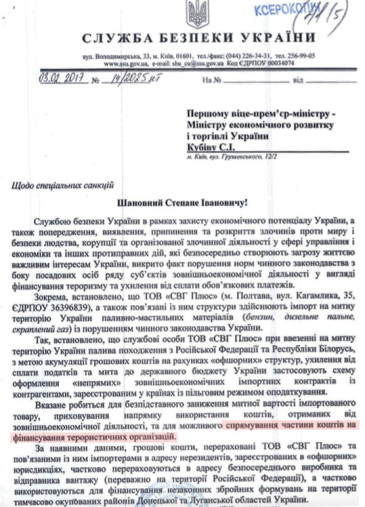 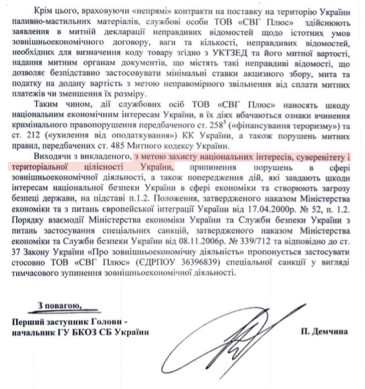 To protect national interests and sovereignty of Ukraine, The SSU asks to introduce special sanctions against SVG Plus LLC and to stop its foreign economic activities.

Only after a wide response of the public, addresses to the embassies and National Anti-Corruption Bureau, round table discussions, briefings in the Verkhovna Rada, speeches from the rostrum, addresses of MPs did the Ministry of Economy lifted the sanctions and the SSU let go of the cargo they had been blocking for three and a half months. I personally took traders to see Kubiv, to make him look in the eye of those people whom he deprived of business, their employees, ordinary Ukrainians – of their jobs, and Medvedchuk – of his competitors, with one stroke of his pen.

In the course of this blockade, no violations were found. Nobody so much as apologized to traders, even though they lost enormous sums because of leasing the railway tanks, which had been idle for three and a half months, exchange rate differences, taking out circulating assets, on lawyers. For instance, one of the traders, who had been blocked, “SVG Plus”, estimated their losses at 6 million UAH, and is now suing for compensation. Another example – “UkrGasPetroleum”, which imported 4200 tons of liquefied gas in August of 2016, and zero in August of 2017. They still have their accounts arrested, computers and documents – confiscated, one inspection is followed by another, even though nothing’s left to confiscate.

After the market cleansing courtesy of the Security service, Russian authorities entered the game, unsurprisingly siding with Medvedchuk, Putin’s crony and godfather of his child. The Federal Technique-Export Control Service established that “Rosneft” would be the only supplier of gas for Ukraine, and its recipient is “Proton Energy” company, registered in Switzerland (the registration address should fool no one, as the notorious intermediary RosUkrEnergo was also registered in the canton of Zug). The turncoat Serhiy Kurchenko, who was feeding off the liquefied gas in the Yanukovych times, also tried his luck in getting a share in gas supplies. He did not succeed though, as, unlike Medvedchuk, he was not given a green light by the SSU.

Now “Rosneft” is selling all of the liquefied gas to shell company “Proton Energy”. They are doing it on exclusive terms, too: rumor has it that the Russian monopolist lets “Proton” have the product according to the formula “Argus quotation minus 23 dollars”, while “Proton” sells it to Ukrainian traders with the interest “Argus quotation plus 25”. Consequently, most of the profits from this scheme accumulate on “Proton Energy” accounts. One can give lengthy explanations of the resulting gas deficiency by the intermediary’s problems, but it is not the case. Had Ukraine not been presented to Medvedchuk on a golden platter, his problems would have never become ours!

The scheme is realized through his junior partner – owner (on paper) of the company “Proton Energy”, Israeli citizen Nisan Moiseev (the program “Schemes” by Radio Liberty even filmed them flying to Kyiv on Medvedchuk’s private jet and kissing when saying goodbye). Current political issues are dealt with by the old ally of Medvedchuk and his brother’s, MP from the “Opposition Bloc” Taras Kozak. Obviously, neither Kozak, nor Moiseev would be able to negotiate such terms without the powerful cover.

The aftermath of the market re-division is as follows: in November of the last year, before the sanctions, 1% of the liquefied gas import market belonged to Medvedchuk’s organizations (“Creative”), whereas since May until present they own about 30-40 % of the import market. Simultaneously, shares of the companies, which had been subject to a fruitless SSU investigation, dropped from 30 to 11%.

This story is the utmost shame for the SSU, and the executive producer of the scheme, Pavlo Demchyna, who was caught red-handed, presented David Sakvarelidze and me with a lawsuit.

It is not Demchyna’s own initiative that we are talking about, it’s the fact that he was simply following orders from the Bankova, the President’s office. During the spring liquefied gas import crisis peak Ihor Rainin, head of the Presidential administration, declared his support for the blockade of the independent traders.

We need to stop lying to ourselves. No liquefied gas market cleansing could be done without Poroshenko’s authorization. Also, taking into account his ways of doing business, one can hardly believe that he gave a go-ahead to re-carve the sector and put Medvedchuk into leading position without a nice “tip”.

Moreover, company “Proton Energy” was allowed by the Anti-Monopoly Committee of Ukraine to buy gas station chain belonging to “Rosneft” (which is presently under the international sanctions, by the way!) and operating under the brands Formula, TNK, “Zolotoi Gepard”, “Smile”. One more thing: Liquefied gas is just one of many activities for Medvedchuk. He is also “godfather” to the scheme of diesel supply, bought from “Rosneft” using the identical discount program, pumping it to town Novohrad-Volynskyi through the petroleum product pipeline. As it turns out, the consumers do not just sponsor this crony of Putin’s. Medvedchuk’s special terms kill competition on the diesel market. And, sadly, kickback from this scheme goes to a lavishly furnished office on Bankova street.

One thing is clear: this cannot go on. Even clearer is the fact that Ukrainian corruption masterminds would never give up the goose that lays the golden eggs. The only option for the Ukrainians is to join their forces fighting for the clean government. Otherwise, this government will just go on profiteering at our expense.