Since 2011 up to 10 Ukrainian banks were involved in a scheme of siphoning of assets, where the money were alleged unlawfully withdrawn by the owners and/or insiders of the insolvent Ukrainian banks through correspondent accounts of different banks incorporated in EU, including two Austrian banks: Meinl Bank AG (SWIFT code MEINATWWXXX) and Bank Winter & CO AG (SWIFT code WISMATWWXXX). Available official data proves that a very similar sequence of agreements and transactions was executed, which is described below in general and on the example of a few cases in particular.

From December 23, 2010 to January 11, 2013 (most of the correspondent account in this scheme were registered during this period) the Head of the National Bank of Ukraine was Serhiy Arbuzov, close associate of Viktor Yanukovitch. Serhiy Arbuzov is under the EU sanctions now and in Ukraine he is under suspicion of criminal conversion of PJSC Expobank’s assets by abusing his official position. 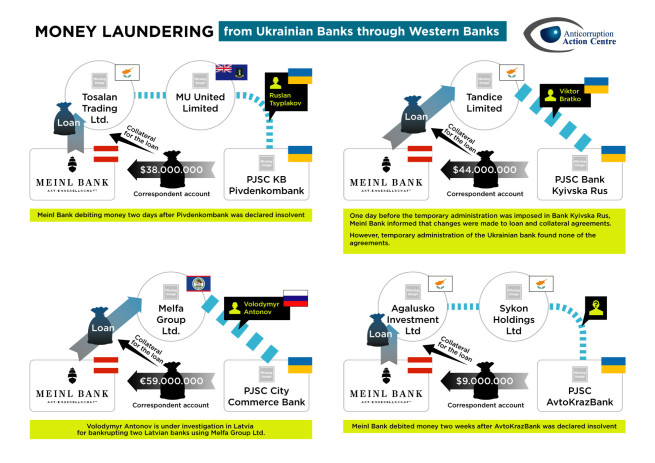 Temporary administration of insolvent banks in Ukraine submitted criminal incidents reports describing this scheme and facts to various Ukrainian law enforcement agencies. However, law enforcement agencies in Ukraine are in transition from corrupt system and incapable to investigate properly such kind of complex financial money laundering schemes. Therefore, the Anti-corruption Action Centre submits this description of facts simultaneously to Austrian prosecution service and to the newly fledged National anti-corruption bureau of Ukraine.

Criminal incidents reports were already submitted by temporary administration of insolvent banks in Ukraine regarding the following banks: 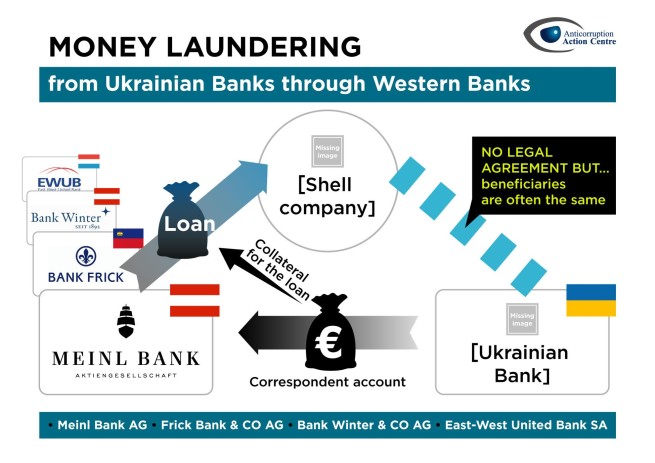 Following facts are showing examples of siphoning of approximately 200 million Euro from the Ukrainian banks through Meinl Bank AG and related shell companies.

On October 9, 2012 PJSC KB Pivdenkombank opens a correspondent account with the Meinl Bank AG and deposits 38 million dollars there.

On May 26, 2014 temporary administration was imposed in the Pivdenkombank. According to the Ukrainian legislation it should approve all transactions of the bank.

Two days after this, on May 28, 2014 Meinl Bank debited money from the abovementioned correspondent account as Tosalan Trading Ltd did not return the loan. Debiting of the money was proceeded without the approval of the temporary administrator of Pivdenkombank.

Hard copy of the agreement between Pivdenkombank and Meinl Bank was not found by the temporary administration of the bank. Therefore they addressed two requests to send the copies of the agreement to the Meinl bank with no answer.

On March 19, 2015 PJSC Bank Kyivska Rus was declared insolvent by the National Bank of Ukraine resolution and the temporary administration was imposed.

The temporary administration found out that the bank had a correspondent account in the Meinl Bank registered on 2 June, 2011, where 44 million dollars were deposited.

After the temporary administration sent a requested to the Meinl Bank to transfer the money to its account in the national bank, Meinl Bank responded about impossibility of proceeding the transfer.

44 million on this account was used as a collateral for the loan agreement between Meinl Bank and the Tandice limited.

Final beneficiary of the Tandice Limited is Mr. Viktor Ivanovitch BRATKO, who at the same time used to be the Head of the Board of the Bank Kyivska Rus and its biggest shareholder.

The crime incident report was logged about these facts by temporary administration’s authorized representative, which includes all the above-mentioned facts.

Journalistic investigation revealed that at the moment of imposing temporary administration 59,3 million Euros were deposited on the correspondent accounts in Meinl Bank according to the accounting records. However, the money could not be transferred to Ukrainian account on the request of the temporary administration, as it was said that there was no more money on this account.

The security and pledge agreements dated back in 2011 on the loans of Melfa Group LTD (Belize company) were found in the vault of the bank, which probably were the legal basis of the debiting the money from the correspondent account in the Meinl Bank.

The owner and beneficiary of the Melfa Group LTD is Volodymyr Antonov, who at the same time until 2012 was the beneficiary owner of the PJSC KONVERSBANK.

According to the Crime Incident Report, logged by the temporary administration of PJSС AvtoKrazBank the same scheme of siphoning of assets is suspected. According to the Board Resolution of the National Bank of Ukraine No. 320 as of 30 May 2014 the PJSC AvtoKrazBank was declared insolvent and temporary administration was imposed, which began to audit the documentation.

It was found out that PJSC AvtoKrazBank had a correspondent account with Meinl Bank AG as of 15 December 2011 and more than 9 million dollars were carried as an asset there according to AvtoKrazBank’s books.

On 12 June 2014 the PJSC AvtoKrazBank received a SWIFT message from Meinl Bank AG notifying about occurrence of the conditions, under which the money on the correspondent account of AvtoKrazBank will be debited on 12 June 2014.

The next day, on 13 June 2014 Meinl Bank AG sent the official notification letter to AvtoKrazBank about debiting money from this account.

According to the SWIFT statement of this account, received by AvtoKrazBank on June 16, 2014, 9 031 189, 66 dollars was transferred on June 12, 2014 from the correspondent account of AvtoKrazBank to the account of AGALUSKO INVESTMENTS LTD.

Agalusko Investments Ltd. is a Cyprus based company.

However, the temporary administration of AvtoKrazBank neither found any of these two agreement in the bank nor they were registered and secured by the reserves of the bank.

Challenging legitimacy of the transactions with the correspondent account, the temporary administration of AvtoKrazBank sent three SWIFT requests of the copies of the abovementioned agreements to Meinl Bank on June 17, 2014, June 18, 2014, June 24, 2014 and an official letter of request to the Board Member on June 27, 2014. Meinl Bank did not respond to any of these requests since then.

PJSC Bank Tavrika was declared insolvent on December 20, 2012 and the State Deposit Guarantee Fund had to return 211 837 947 UAH (approx. 26,5 million dollars) debt. The debt was formed because security and pledge agreement with Meinl Bank was not secured with the bank reserves.

PJSC Bank Tavrika had a correspondent account with Meinl Bank from November 16, 2011.

The construction projects in Ukraine of PJSC Trest Pivdenzakhidtransbud were meant to be financed with this loan. The same day security and pledge agreement was signed between Bank Tavrika and Meinl Bank, securing 26,5 million of the loan, granted to Winten Trading LTD.

On November 27, 2012 26,5 million dollars were debited from the Bank Tavrika correspondence account by Meinl Bank as Winten Trading LTD did not perform its obligations under the loan agreement as of December 22, 2011, what resulted in the Bank Tavrika’s insolvency.

At the time of debiting the money, Meinl Bank could be subject to unlawful bias and collude with Ukrainian company and bank, as its subsidiary owned 23% of the shares of the Ukrainian company, which was obliged to implement the obligations under the loan agreement from Meinl Bank itself.

PJSC Trest Pivdenzakhidtransbud was the company which had to implement the construction projects under the 50 million loan from Meinl Bank to Winten Trading LTD on December 22, 2011.

East Advisors (subsidiary of Meinl Bank) owned more than 23% of PJSC Trest Pivdenzakhidtransbud’s shares at the end of 2012.

When Winten Trading LTD did not fulfill the obligations under the loan agreement on construction projects of Trest Pivdenzakhidtransbud, Meinl Bank debited money from the correspondent account of Bank Tavrika.

The security and pledge agreement of Bank Tavrika with Meinl Bank as of December 22, 2011 was not registered by Bank Tavrika and secured with the reserves according to Ukrainian legislation (the same scheme used in all previous cases).

Investigative journalists in Ukraine reported that 746,5 mln USD and 52,9 mln Euro were laundered from Ukraine in 2014-2015 using these scheme through 4 mentioned above Western banks, including Meinl Bank AG.

As of February 2016 there are 65 insolvent banks in Ukraine. State Depository Insurance Fund already repaid about 3.2 bln Euro of insured deposits. In the case of insolvency of the banks according to the Ukrainian legislation, minimum 7000 dollars of the insured deposits of natural persons have to be compensated. Biggest amount of compensations for depositors of abovementioned banks had to be funded by the State budget of Ukraine, which has a big deficit itself, and Ukraine receives many financial loans and aids from EU and its member states because of this.

There is high likelihood that above mentioned EU banks are cooperating with the persons in Ukrainian banks and shell companies, which are committing bank fraud, grand larceny and money laundering.

In May 2015 Meinl Bank was still organizing seminars for Ukrainian companies and banks on management and capitalization of the assets.

Taking all the facts into account the complot of the Austrian banks together with the officials of the Ukrainian banks, who were acting at the same time on behalf of the borrowers could be suspected in criminal conducts, as the conflict of interest and fraud was obvious in many cases.

The alleged money-laundering scheme could be possible only with the involvement of top-management of the Ukrainian National Bank of Ukraine, operated under the EU sanctioned Sergiy Arbuzov.

The investigation has to be done also concerning the shell-companies, which received big loans through this scheme, where verification of the agreements and transactions made is also necessary, as such schemes are violating existing EU anti money laundering standards.

There is high likelihood that owners and/or insiders of many insolvent banks in Ukraine receive the assets, which should have been returned to the Ukrainian banks’ depositors and used for covering expenses of the Deposit Insurance Fund and debt repayment to the creditors of the bank.

Instead of returning the money to the possessors and/or to the State it was withdrawn from correspondent accounts at EU banks, including from accounts at Meinl Bank AG. Final beneficiaries of these transactions are unknown. In order to recover ill-gotten funds it is important to run international investigation tracing funds sent to offshore companies.

Open sources prove that the same scheme with the same participants (Volodymyr Antonov through Melfa Group LTD) was used to drive also the Lithuanian banks Latvijas Krājbanka and Bankas Snoras to bankruptcy, so such complex investigation could stop further corrupt practices and abuses of financial institutions in Austria on international level.

We hope that facts described above will be of high interest for Austrian prosecution service, which might consider opening criminal investigation based on given information.