No one is surprised with cases of Bohatyriova and her cronies “dumped” by the General Prosecutor’s Office.

However, actions of the new Specialized Anti-Corruption Prosecutor’s Office are getting increasingly astonishing. They are closing the cases of NABU top-doctors who were caught red-handed.

This are the cases which have been used as PR for everybody on television while ignoring video from hidden cameras that was seen by hundreds of thousands of people.

Do you remember one of the first notable detentions performed by NABU, the one Arsen Avakov bragged about on his Facebook page – when the chief sanitary officer of the country Svyatoslav Protas was caught red-handed during the transfer of cash?

The scheme was simple. He called doctors and agreed that he would “sign off” a double bonus for them, one of which should be returned to him. Using just one such fraud, the Head of the Sanitary and Epidemiological Service was going to earn almost UAH 0,5 mln.

It may seem that the case is simple. There is a claimant, one of the doctors who was not afraid to go to law enforcerers, there is a video, dozens of witnesses questioned and a beautiful red-handed detainment. But no.

The case was dismissed recently – for the lack of event of crime.

In other words, the Prosecutor’s Office says that the bribe is not quite a bribe, and uses the main version of suspect, Svyatoslav Protas, to close the case. He said the money was allegedly required to “support the law.”

Since when someone is being paid to support the laws?!

It is strange, because right after the detention, in an interview to one of TV channels Deputy Anti-Corruption Prosecutor Victor Kryvenko said that the event of crime was obvious.

“If this is legitimate, then I have no questions then, I raise my hands,“ says Kholodnytskyi’s Deputy, Volodymyr Kryvenko. However, eight months later the SAP gave up and dismissed the case. They claimed that there was an “absence of event of crime”.

When NABU detectives tried to appeal the decision of the prosecutor, another Deputy of Nazar Kholodnytskyi, Maksym Hryschuk wrote that his subordinates dismissed the case against Protas legally exactly because of the absence of the event of crime. 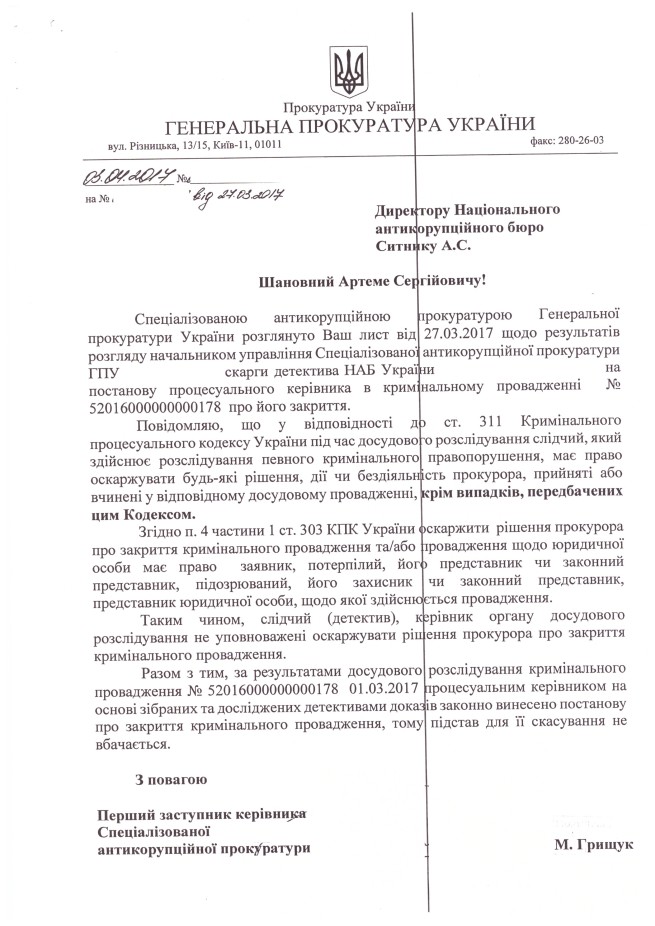 Not having other levers of influence, the NABU sent the letter of complaint to the Prosecutor General on the omission of prosecutors in this case, because only Yuriy Lutsenko by his decision could save the case and restore the proceeding. Instead, he returned it back to Kholodnytskyi, meaning they deal with their problems on their own.

The case still lies on the shelves in SAP.

If Kholodnytskyi does not renew the case having evidence in form of the video, cash, and witnesses, it will be difficult to imagine another doctor who goes to a law enforcement agency to rat out superior bribe taker.

Another “medical” proceeding, started by the SAP is totally different. Prosecutor started the case himself for international procurements against Suprun and new team of the MoH…after reading an article on the internet.

Prosecutor did not even check the fact that article disappeared from the resource, which means it was a puff piece. Moreover, not only the Prime-Minister but also the Prosecutor General spoke in support of international procurement of medicines, as one of the most effective anti-corruption reforms in the field of medical procurements.

Only pharmaceutical lobbyists, who were benefiting from sick Ukrainians for years and earning exorbitant profits on this, were against it. Only during the first pilot year of international procurements, the state managed to save hundreds of millions UAH.

What caused such frenzied activity against international procurement team and new team of the Ministry of Healthcare, conjoined with the dismissal of criminal proceedings against doctors who were caught red-handed?

The question of selectivity in proceedings may rather indicate “unhealthy” symptoms in the newly established anti-corruption authority, the Specialiazed Anti-Corruption Prosecutor’s Office.