Home Новини AntAC filed a lawsuit against police for inaction, demands to open the case for attacking Shabunin

AntAC filed a lawsuit against police for inaction, demands to open the case for attacking Shabunin

The Anti-Corruption Action Center wants to force the National Police to investigate the attack on Vitaliy Shabunin through the court. As result of the attack the Head of Board received chemical burns of both eyes.

Vitaliy Shabunin who was poured over with green antiseptic filed the following lawsuit to the court. The police did not open the criminal proceeding upon an appeal for infliction of light bodily injuries within 24 hours, as required by the Code of Criminal Procedure. Thus, the anti-corruption activist went to court. 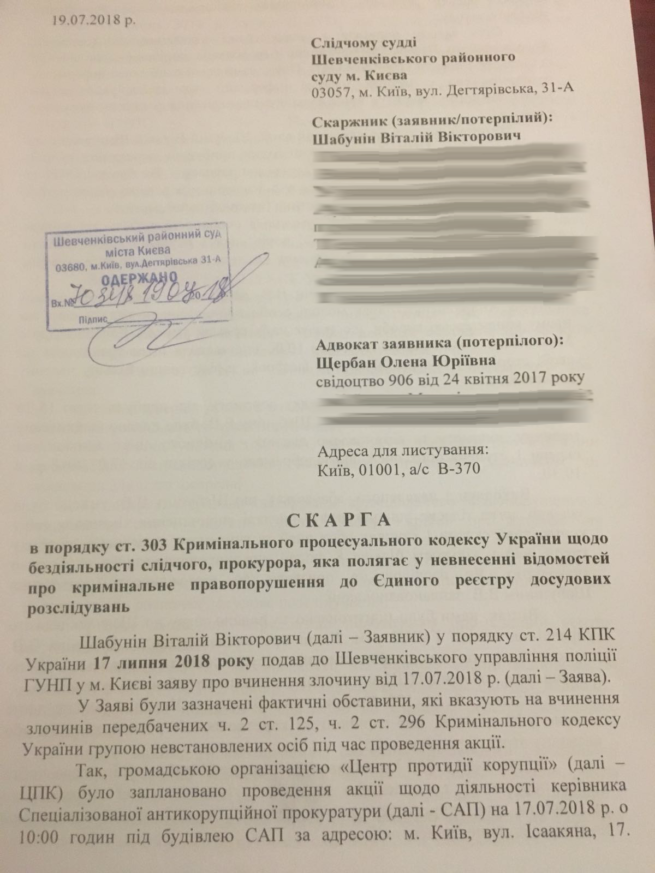 At the same time, yesterday it became known that Kyiv Prosecutor’s Office opened the criminal case regarding provocations in front of the Specialized Anti-Corruption Prosecutor’s Office on July 17. The events were qualified merely as hooliganism committed by a group of people (Part 2, Article 296 of the Criminal Code of Ukraine).

The AntAC explains that this criminal case was opened on instruction of Prosecutor General Lutsenko, but not upon appeal of Shabunin, which he filed to Shevchenko district police department after the attack.

“This is an attempt to clear provocateurs and attackers of Shabunin with light administrative punishment for hooliganism, but not according the offence of light bodily injuries (Article 125 of the Criminal Code of Ukraine), which provides criminal responsibility of attackers on AntAC Head of Board,” – states Olena Shcherban, the Anti-Corruption Action Center’s lawyer.

We would like to remind that Shabunin filed a statement of crime to the police about the attack and causing light bodily injuries on July 17. He attached the medical report stating the fact of chemical burn of both eyes, issued by the Oleksandrivsky Hospital, where he was taken after unknown dressed in military uniform poured green antiseptic into his face.

On the day of attack, the police arrested two attackers and later released them, making administrative protocols on provocateurs for petty hooliganism. Attackers are facing only minor fine.

It should be noted that the criminal case opened on the second day after the incident by the Prosecutor’s Office has nothing to do with the attack on Vitaliy Shabunin and concerns only the offence of hooliganism and will obviously be closed due to the absence of the hooliganism crime.

This allows the police to close the case on the ground that they simply will not find facts of criminal hooliganism. This is because the incident concerned the unlawful actions of causing damage to the particular person, that is Vitaliy Shabunin, who because of the provocateurs actions received chemical burn of both eyes and temporary disability.

The fact is that the only opportunity to punish the attackers who have poured green antiseptic into Shabunin’s eyes is to open the criminal proceeding concerning offence of light bodily injuries. The police can do this only following victim’s statement of crime.

“It is profitable for the police to qualify provocateurs’ actions only as administrative hooliganism and to close their eyes on light bodily injuries regarding Shabunin. This will allow the attackers to receive only minor fines,” – adds Olena Shcherban, the Anti-Corruption Action Center’s lawyer.

We’d like to recall that on July 17, the group of young men dressed in military uniforms attacked the AntAC Head of Board Vitaliy Shabunin in front of the SAPO and poured green antiseptic into his eyes. According to the medical report of the Oleksandrivsky Hospital, Shabunin has chemical burn of both eyes.

The incident happened during the provocation, when activists of the Anti-Corruption Action Center, Automaydan and Declaration of Non-Indifferent arrived to the Specialized Anti-Corruption Prosecutor’s Office to hold rally for the resignation of its Head Nazar Kholodnytskyi. The reason for it was the closure of the “case of backpacks” against the son of Minister of Internal Affairs Oleksandr Avakov and former Deputy Minister Serhii Chebotar. Activists brought Kholodnytskyi a backpack with the inscription “Pack your stuff and go out”.

In order to prevent the activists’ action to SAPO building elderly women, teenagers, and men dressed in military uniform were arranged. The action-provocation was led by former police officer Ilya Kiva. Most of the attendants were police officers in plain clothes, military and police uniform.

Let’s remind that the provocateur Filimonenko poured gas to the face of Vitaliy Shabunin in front of the military enlistment office a year ago. Shabunin got into the hospital with chemical burn of eyes. Nevertheless, this case is still not being investigated.