Home Новини An arrested for bribery official of the State Service of Ukraine for Geodesy which Lutsenko hyped so much about, was punished with a minor fine - NASHI GROSHI

An arrested for bribery official of the State Service of Ukraine for Geodesy which Lutsenko hyped so much about, was punished with a minor fine – NASHI GROSHI

Prosecutor General Yuriy Lutsenko reported on his Facebook page about the arrest of Mr. Bodnar.

A.i. Head of Directorate General of the State Service of Ukraine for Geodesy, Cartography and Cadastre in Ternopil Region Bodnar was arrested for receiving a bribe in the amount of 3,000 USD. 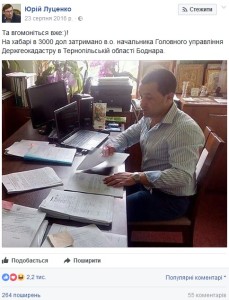 Ternopil City Court found former a.i. Head of the Directorate General of the State Service of Ukraine for Geodesy, Cartography and Cadastre in Ternopil Region Pavlo Bodnar guilty of abuse of office and sentenced him with a fine in 25,500 UAH. So was the decision of the court.

Prosecutor’s Office accused Bodnar of the fact that in August 2016 he took money from a citizen for influencing a director of Ternopil Research and Design Institute of Land Management for the latter to adopt a decision on accelerated and unhindered development of land management project. Bodnar received 500 USD and was arrested by law enforcement officers.

In court an official has fully admitted his guilt and confirmed that everything happened as was described in the indictment act. Bodnar explained that “he committed a crime due to severe family circumstances caused by lack of livelihood sources and necessity of treatment for sick parents” with whom he lives. Sincerely repented.

The court in its turn considered “person’s profile, his young age, the fact that he had not been previously convicted, positive characteristics from the place of work and circumstances that mitigate punishment, namely: sincere penitential, confession of guilt, helping to establish the truth and the fact that he takes care of disabled parents” and sentenced him with a fine in 25,500 UAH as well as prohibited to take up positions connected with organizational and managerial, administrative and economic functions for a year.

It’s worth mentioning that in September 2016 Bodnar stated that a case against him was false. The official said that he did not take any money even though a woman several times tried to “thank” him. As he said, he refused several times to accept her documents and signed the order on allocation of a land plot only after she brought him all necessary documents. As a gratitude the woman invited him for a dinner.

“I’m not married, and she is a good-looking brunette, that’s why I said yes. We met in the café “Avtoport”. A woman came in, put documents on the table. Among the papers there was an envelope where, as he later found out, was 200 USD (second part of a 500 USD unlawful reward that Bodnar was charged for – Edit.). I pushed the envelope aside right away, did not take the money in my hands. I have long ago been suspecting that I’m being framed, that is why I tried to avoid any suspicious packages. I cannot understand why I was made known for the whole Ukraine as a bribe-taker? Bribery is when you give me the money and I make this and that for you. In this case, everything was done, documents were signed and the land was already in ownership”, – said Bodnar.

A sentence has not yet come into force until the expiration of terms for appeal.