The court granted temporary access to investigator of the Chief Military Prosecutor’s Office to the procurement documents for the purchase of supplies for peritoneal dialysis by Vinnytsia Hospital named after Pyrohiv from LLC “Diavita”.

The decision was issued by Pechersk District Court on May 31.

The decision is not available in the Unified State Register of Court Decisions because the case was considered in a closed court session. “Nashi Hroshi” has it’s copy. It indicates that the investigators needed access to classified documents. But it is unknown which procurement document is secret, because none of them are classified. 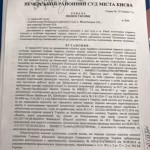 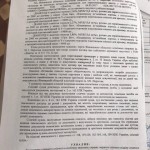 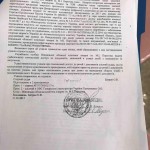 A request for access to procurement documents was filed by Senior investigator for particularly important cases of the first investigation divison of investigation department of the Chief Military Prosecutor’s office of PGO lieutenant of Justice O. Trokhymenko

He wants to get access to the documents on procurement of supplies using negotiation procedure from LLC “Diavita” which represents a world market leader company “Baxter” in Ukraine. Including publicly available Ministry of Healthсare’s documents, which indicate the fact that replacing of drug for patients who have already begun to take the drug of one manufacturer is not possible.

Earlier “Nashi Hroshi” informed that Kyiv Local Prosecutor’s Office No.7 led this proceeding on “possible violations” of the law by Ministry of Healthcare and regional divisions of healthcare officials during the procurement of supplies for peritoneal dialysis. At that time, doctors and officials were receiving letters from the Haed of the Main Division of Counterintelligence Protection of the State Interests in Economic Security Serhiy Semochko. He wanted regional customers to conduct open tenders so that competitors of “Baxter” from among the dealers of “Fresenius” company could win by suggesting a lower price. This problem was pointed out by Ministry of Healthcare. They notified that the replacement of drugs during treatment is dangerous for patients.

On May 3 President Poroshenko fired Semochko from Counterintelligence Division and appointed him for the position of the Head of the Main Division of SSU in Kyiv and Kyiv region.

On May 10, Vinnytsia hospital named after Pyrohiv received a letter with the requirement to carry out open tenders from the First Deputy Head of the Econimic Protection Department of the National Police of Ukraine Serhiy Vyazmikin.

On May 31, the court gave permission for seizure of documents from Vinnitsa hospital to investigators from the Military Prosecutor’s Office.