Home Новини "A Crib" for the Prosecutor General, Or How Confiscation of "Yanukovych’s Coffers" Should Not Have Been Classified

“A Crib” for the Prosecutor General, Or How Confiscation of “Yanukovych’s Coffers” Should Not Have Been Classified

We filed a lawsuit on October 23, 2017, because the decision of Kramatorsk Court concering 1.5 billion USD confiscated from Yanukovych was classified.

We consider the decisions of the state bodies that classified the court verdict to be unlawful. We demand to revoke them and to publish the verdict in the Unified Register of Court Decisions.

We expect that Prosecutor General Lutsenko and his henchmen will accuse us of “serving Yanukovych”. There is quite a community of such “servants”: Transparency International, that  is at law with the Prosecutor General’s Office for classifying the court decision, and Anti-corruption Bureau, that opened the case as even they do not understand what is the money confiscated by the PGO and whether this is the same funds that the NABU arrested in other proceeding.

Unfortunately, Prosecutor General Lutsenko, together with Military Prosecutor of ATO Forces Kostiantyn Kulyk, who was once arrested by the National Anti-corruption Bureau, served nice to the holders of Yanukovych’s “coffers” (“obschak” – mutual criminal funds, shared looted assets). By their  reckless confiscation of their billions .

Let me explain why we brought an action to the court.

We tracked the sequence of events related to classifying of 1.5 billion USD and we came to the conclusion that the investigators of the Prosecutor General’s Office were planning since the very beginning concealment of the verdict. The plea deal that made confiscation possible is void, in our opinion.

We want to stop any future attempts of the Prosecutor General to confiscate assets of third parties resorting to classified court decisions that approve dubious plea deals.

A dangerous trend has nothing in common with the supremacy of law principles, inviolability of the right of property and guarantee of protection of rights of people in the criminal proceeding.

Such practice allows criminals-millionaires to restore their control over corrupt assets via international courts while prosecutors get a chance to raid ordinary business.

The journalist wrote a lot on the topic, and we agree on that: the investigators of the PGO did not manage to prove anything significant in the case of embezzlement of “Yanukovych’s 1.5 billion USD”. That is why “the plea deal” was used, as well as the court verdict that approved this deal as the grounds for confiscation of the money that was blocked at the bank accounts by the financial intelligence unit and was an eyesore to someone.

We remind that on March 28, Kramatorsk City Court approved by its verdict the agreement of Arkadii Kashkin, the former director of “Gaz Ukraina-2020” company, and confiscated 1.5 million USD belonging to Yanukovych and his inner circle by the same verdict. The verdict came into force in a month as the Prosecutor General reported it was not appealed by anybody.

Special confiscation of billions took place on the grounds of the court verdict that approved the plea deal recognizing Kashkin’s guilt, but not by proving guilt of all owners of the coffers alongside the crimes they committed to collect the assets.

We have all the grounds necessary to call such plea deal void.

The investigation knew for sure, that Kashkin, who admitted his guilt, was nothing but a “dummy” and he handed his passport and state identification number for the purposes of registering him as founder ad owner of “Gaz Ukraina-2020” firm.

It should be explained that the plea deal is made on certain conditions: in case if the suspect either exposes his accomplices or tells about their other crimes, and this information is confirmed by evidence.

Could Kashkin know anything about “Yanukovych’s coffers” origin, and give, as Prosecutor General Lutsenko says, “completely revealing evidence against management, ways and methods of embezzlement, particular firms and accounts around the world and their further use in Ukraine”?

The answer was known to the investigators as early as in 2015, it can be read in the verdict when Kashkin got a suspended sentence:

In order to fulfill the previously designed plan to conduct criminal activities in the end of 2011, PERSON_4, when being at the office located in Kharkiv, vul. Hanny, 32, conspired with PERSON_2, persuading the latter to purchase legal entity status, namely “GAZUKRAINA-2020” LLC in order to cover up the further illegal activities. The reward for purchasing the economic subject equaled 500 USD.

PERSON_2 was aware of possessing neither the necessary moral or business qualities, nor sufficient funds for conducting economic activities; realizing that as the company’s founder and official would not participate in the company’s activity or management, and his exclusive role would be that of covering up the illegal activities.

Having agreed to purchase the said company, PERSON_2 at the time unknown to the investigation during November 2011, under instructions from PERSON_4, handed the latter their passport of Ukrainian citizen and certificate of assigning the identification number to be used for issuing the documents necessary for registering the right of ownership.

Then the person unknown to the investigation and at unknown circumstances, with the previous consent of PERSON_2, using their passport and certificate of assigning the identification number, prepared protocol No. 2 of the general meeting of “GAZUKRAINA-2020” LLC of 17.11.2017, according to which the previous owner PERSON_5 left the LLC and resigned from position of director, whereas PERSON_2 became member of the LLC.

As we can see, the prosecutors offered a plea deal to a person that most likely did not understand what he was recognized guilty for. It happened after 3 years of investigation, when the PGO was to find not another “scapegoat” but substantial evidence of 1.5 billion USD coffers origin. And to prove that its owners and ultimate beneficiaries knew about the criminal origin of the money, but not a dummy director.

Why would one make such a deal public? Let it be a secret.

There are so many respondents in the court case because numerous bodies were involved in the process of classifying the court verdict, and all their decisions are unlawful. From their letters we determined the grounds for classifying the verdict full text as state secret.

We believe these grounds to be unlawful.

Before Kramatorsk Court pronounced its judgement, Military Prosecutor Kulyk prohibited publishing it. He made resolution: “On application of the security measures to the persons participating in criminal court proceedings”, where it is written that verdict non-publication is itself a protection measure.

There is a separate law regulating these issues – “On Ensuring Security of the Persons Participating in the Criminal Court Proceedings”. It does not stipulate such security measure as non-publishing full text of the court verdict.

19.05.2017, the verdict of Kramatorsk City Court of Donetsk oblast of 28.03.2017 in criminal proceeding No. 234/4135/17 against Kashkin A.P. under Article 255, part 1, art.28, p.4, art.209 p.3 of the Criminal Code of Ukraine was signed by the judge using electronic signature and sent to the Unified State Register of Court Decisions. Along with that, it is derived from the State Enterprise “Informational Court Systems” letter of 31.05.2017, that the Military Prosecutor’s Office of the ATO forces in its regulation on implementing the safety measures concerning persons involved in criminal judicial proceeding obliged the administrator of the SE “ICS” Register to implement security measures in the criminal proceeding concerning Kashkin A.P. such as keeping the court verdict from the Unified State Register of Court Decisions. 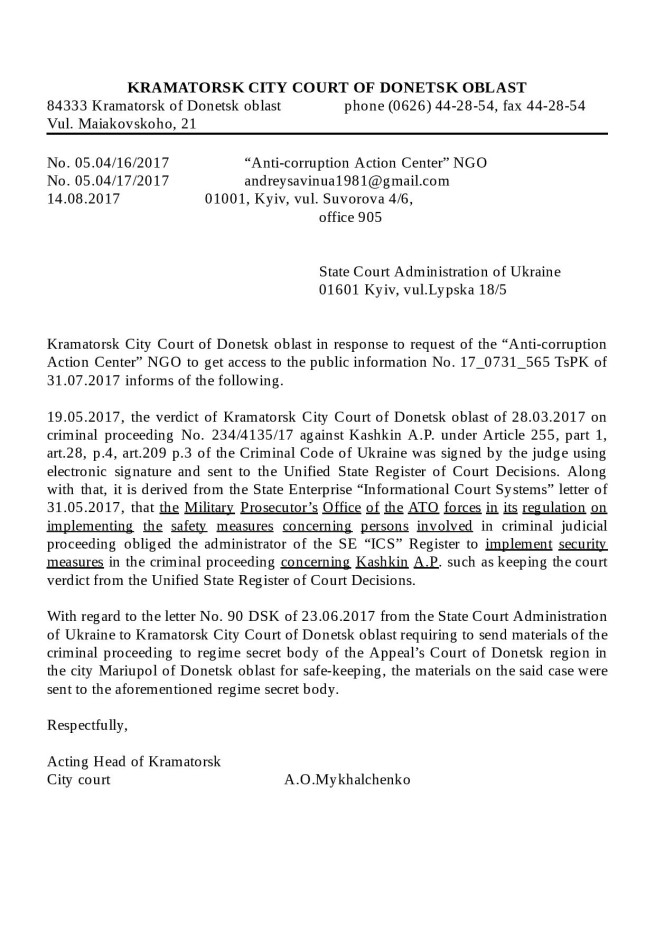 As we can see in the response of Kramatorsk Court, “the security measures” applied to Kashkin personally.

One can suggest that the prosecutors did not publish the decision in the Registry to keep confidentiality of other witnesses or participants of the legal proceeding.

But identification data of the case subjects or any other physical entities are never published in the Court Register – they are substituted with the words: “PERSON1” та “DATA1”. It cannot be the grounds for concealing of the whole decision text.

After the military prosecutors, the PGO classifies “top secret” the whole text of the court decision. They explain it by the verdict containing data on some secret investigative actions.

We also inform you that the state expert in secrets of the Prosecutor General’s office of Ukraine made the decision to classify the descriptive part of the verdict by Kramatorsk City Court in Donetsk oblast of 28.03.2017 in case No. 234/4135/17 to indict the person who had committed criminal offences under part 1 of Article 255, part 4 of Article 28, part 3 of the Article 209 of the Criminal Code of Ukraine on 08.06.2017 (expert opinion concerning information that constitutes the state secret No. 3 of 08.06.2017).

The said verdict was classified under the clauses of Article 4.12.4 of the Corpus of data constituting a state secret, approved by the order of the Security Service of Ukraine of 12.08.2005 No. 440 (information about fact or methods of conducting secret investigative actions). 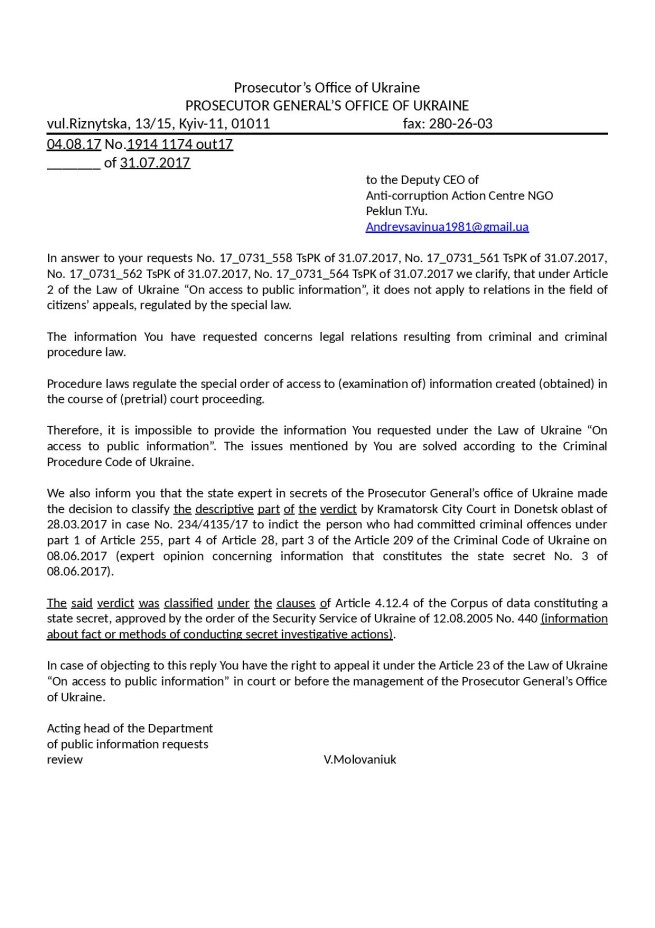 There is only one expert of the state secret in the PGO – Yuriy Lutsenko. The Prosecutor General personally classified “top secret” the whole verdict text. Not a part of it, as stipulated by the law on state secret, but everything.

The validity of Lutsenko’s conclusion is dubious, and the circumstances cited there do not stipulate in any way classifying the whole descriptive part of the verdict. On the whole, the plea deal and the verdict are procedure documents, and the Criminal Procedure Code prohibits including data containing state secret into such documents.

If one assumes the verdict by Kramatorsk Court judges contains data on secret investigative actions, the expert in state secrets has the right to hide such part, but not the whole verdict text. The same way the confidential data of a person are erased and substituted with the words “LIMITED ACCESS DATA”.

Meanwhile the Law “On Access to the Court Decision” directly determines that all the court decisions, with a few certain exceptions, are published in the Registry within 24 hours.

All of this is evident violation of the law, thus the officials, that helped the Prosecutor General to conceal the verdict from the public eye, should be called to account.

For some reason, Yuriy Lutsenko believes everyone should know about the country having been robbed by Yanukovych’s henchmen, but nobody should know what evidence of that criminal activity were found by the prosecution.

Such understanding of the law by the Prosecutor General who received no law degree is a direction sign to the European Court for Yanukovych’s entourage. The PGO gave and is giving all the chances for them to win the case by confiscating in the most unlawful manner other assets – Odesa Port Plant, embezzled Kurchenko’s fuel, etc.

It is a very dangerous trend as nobody knows just how legitimate the property confiscation was.

Such “Robin Hood” acts might cost the country a lot. Due to primitive and numerous violations of law by the prosecutors, the lawyers will recover all their clients’ confiscated property and money.

The longer the court decision is secret, the more substantial the lawyers’ arguments become for the European Justice.

If Mr. Lutsenko and Mr. Kulyk are sure of lawfulness of their actions, why don’t they just publish court decisions – and any suspicions will be dropped. Or they can come to the court in person, and we will call back our lawsuit.

Daria Kalenyuk, CEO of the Anti-corruption Action Centre, exclusive for the Ukrayinska Pravda